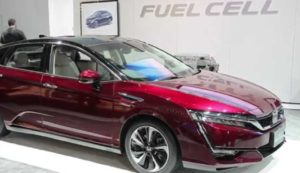 Honda recently announced the release of the 2019 Clarity sedan, which is an innovative addition to the rapidly growing hydrogen fuel cell vehicle market. Due to this state’s environmental policies, zero-emissions vehicles are becoming increasingly popular in California, and the increased range of fuel cell cars versus electric vehicles will lead to the continued growth of the lighter-than-air (LTA) automotive service industry. The time is now to get onboard with this mounting trend, and here’s what you need to know about the Honda Clarity and the importance of being prepared to service this type of sedan.

The fuel cell equipped with the Honda Clarity has a rated range of 366 miles, which can get California drivers from San Francisco to Los Angeles in one shot. This zero-emissions vehicle comes with a number of incentives from the state of California, which is increasingly seeking to push consumers toward purchasing these types of cars.

For instance, Clarity drivers will be able to enjoy the benefits of travel in the HOV lane even when they are the only occupants of their cars. California will also provide Honda Clarity owners with a clean energy rebate of up to $5,000, and Honda itself will provide its Clarity customers with up to $15,000 of free fuel with a three-year lease.

Many California consumers are already opposed to fossil fuels and interested in cars that use renewable energy, and these incentives will only push this trend further. Over the space of a few years, there will be thousands of hydrogen fuel cell vehicles on the roads of California, and the drivers of these cars will need places to stop for servicing when they’re on the road.

Recent improvements in fuel cell technology have made the pricing for hydrogen-powered vehicles less prohibitive. The new 2019 Clarity will be offered for $369 per month, which makes this sedan well within the spending range of many California residents. Far from being a niche product that only the rich can afford, the Honda Clarity’s relatively low price will boost the popularity of this vehicle even further.

With the hydrogen fuel cell revolution looming on the horizon, there will soon be a stark divide between the automotive service businesses that service fuel cell vehicles and those that don’t. More and more consumers will be on the lookout for businesses that can service their cars; do you want to operate the type of business that routinely impresses trendy consumers or the type of business that disappoints stranded Clarity owners in need?

At Marathon Finishing Systems, Inc., we build custom hydrogen service stations for Honda that will be tailored to your exact specifications. To learn more about the hydrogen service bays that are available from Marathon or to obtain your quote, call (800) 919-9035.