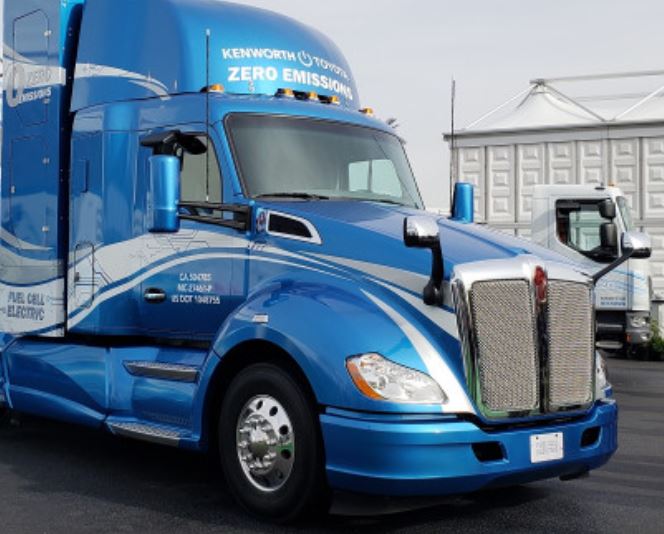 On January 8th, 2019, Toyota and Kenworth revealed their joint project to equip the Port of Los Angeles with ten hydrogen fuel-cell powered semi trucks. This announcement was made at the 2019 Consumer Electronics Show (CES) in Las Vegas, and this partnership represents an $82 million joint venture between the two automotive giants.

The production of these ten modified Kenworth T680 Class 8 heavy-duty semi tractors will be financed by a variety of California state agencies that are focused on reducing fuel emissions. Every day, over 16,000 diesel-powered semi trucks transfer containerized freights at the various ports in the Los Angeles area, and the emissions produced by this truck traffic have a negative impact on the surrounding area.

Clean Energy for the Future

California intends to have 100 percent zero-emission ports by 2035, and this initial project by Kenworth and Toyota represents the first step in achieving this clean energy goal. A variety of other zero-emission heavy truck models were also on display at CES, but the fuel cell-powered Kenworth T680 Class 8 prototype stole the show.

While the ultimate goal of hydrogen fuel cell technology is to provide an alternative fuel source for long-distance ground cargo transport, at this stage of the game, Toyota and Kenworth are proposing their modified T680 Class 8 be used for drayage purposes only.

“Drayage” refers to ground transportation applications of 60 miles or less in each direction, which makes the L.A. area the perfect place to try out these new heavy-duty trucks. While the ports that make up the Port of Los Angeles network are among the busiest in the world, much of the cargo arriving at these seaports only travels a few miles. This small fleet of short-range hydrogen fuel cell vehicles will serve as the proof of concept for the potential that this technology has to reshape the transportation industry.

While Toyota and Kenworth are only making ten trucks for now, if the state of California intends to replace all of their diesel port trucks with hydrogen-powered semis by 2035, the hydrogen vehicle service industry in California is just getting started. Within 16 years, there will be at least 16,000 more hydrogen fuel cell-powered vehicles on the streets of the Los Angeles area, and the Port of Los Angeles is counting on adequate infrastructure being in place to support this clean energy project.

For heavy truck service technicians, the time is now to get in on the ground floor of an emerging industry that is set to utterly reshape the L.A. area drayage transportation infrastructure. The state of California is in need of technicians who are willing and able to service their hydrogen-powered trucks, and since trends that start in California tend to sweep the whole nation in due time, the rest of the United States won’t be far behind in embracing the emergence of hydrogen fuel cell technology as the lifeblood of America’s cargo transportation future.

Get Ahead of the Curve with Our Hydrogen Vehicle Service Bays

Even the most seasoned mechanics need a little bit of help learning new things, and hydrogen vehicles are like nothing any auto technician has seen before. With this new announcement from Toyota, however, there’s no doubting that commercial vehicles running on hydrogen are the wave of the future, which means you need to act now to position yourself advantageously within this emerging industry.

Our encapsulated H2 Service Bays are specifically designed to make it easy to work on vehicles running on hydrogen or other “lighter-than-air” (LTA) fuels. They meet all NFPA 2 requirements, and with the growing popularity of hydrogen vehicles, equipping your business with an H2 Service Bay represents a great ROI potential. We’re the industry leaders when it comes to hydrogen vehicle servicing technology, so call us today for a free initial consultation.